Making Inclusion and Tuition Equity a Reality in Christian Schools

We recently celebrated our 35th Anniversary and honored members of our first generation of leadership with a gala at the Watermark Country Club on October 20 (visit our Facebook page for pictures). In honor of our anniversary, we are pleased to share this video produced by board member Josh Leo, as well as this reflection from our director for thirty-four years, R.H. “Bear” Berends. In this post, Bear shares one of the proudest moments of his career: making inclusion and tuition-equity a reality in the majority of Christian schools in West Michigan.

The Beginnings of Inclusive Education

In the spring of 1980 – as the Christian Schools in Grand Rapids, Michigan were gathering enrollments for the 1980-1981 school year – parents of a grade school age boy walked into Oakdale Christian School and wanted to enroll their son who lived with an extra chromosome known as Down syndrome – which also came with a cognitive impairment, speech problems and a number of other medical concerns. Their rationale was that their other three children had all attended Oakdale and so their expectation was that David would as well. 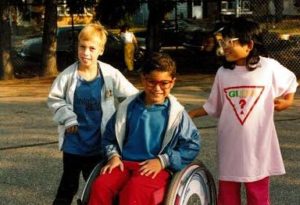 Now this enrollment request was more an act of Reformed civil disobedience back then because David’s parents knew what would happen next – David’s enrollment request would not be accepted and it was indeed turned down in a heartbeat accompanied by the familiar refrain of “we just don’t know how to serve kids like David”!

Thus, a dream was born by David’s folks and others to change attitudes, create teacher repertoire and develop a comprehensive educational system that would honor all God’s kids in the thirty plus Christian schools in West Michigan. These schools were particularly ripe for such a dream based upon their cornerstones of “covenant” and “community” as sealed at infant baptism and practiced by the Christian Reformed Church’s supporting tradition of advocating for parent run, religiously affiliated, non-public schools.

Well, changing a complete educational system is not a task that happens overnight and it was not till the fall of 1989 that the dream of including children with moderate to severe disabilities became a reality. That year Zeeland Christian School led the way in opening up its’ doors to inclusive education programming – nine years after David’s parents walked humbly and faithfully into a Christian school and requested an enrollment for David and eventually his peers.

Advocating for Tuition Equity for All of God’s Kids 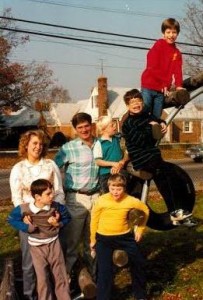 However, the advocacy battle was not yet over since in 1989 parents had to pay the difference between what Christian special education in a local school would actually cost (app $9,000) and what a Christian school general education was going for (about $3,000). Thus a new dream was born entitled “tuition equity” where the concept of covenant and community would bring a full measure of shalom to the West Michigan Christian schools by economically supporting a fair tuition rate for all – no matter what the expense of full educational services for all God’s kids demanded!

So as in the past the “fullness of time” was ushered in while committees were formed and stake holders were gathered to try to resolve this dilemma. Even though it took seven more years of discussions from those first days of inclusive education programming at Zeeland Christian, in the fall of 1996, fourteen of those thirty plus schools opened their doors with full tuition equity for their constituents. The Reformed tradition so ingrained in the combined church, home, and school relationships of West Michigan prevailed once again to form an even more perfect union – recognizing that all Gods’ kids deserved a quality Christian education at an equitable price.

Through all these major changes, the Lord used the advocacy of the first generation of leadership at the Christian Leaning Center (known today as All Belong) along with their local West Michigan area Christian school partners to build a new vision for Christian education. This fifteen-year struggle to set the conversation about creating an inclusive education system wrapped in the covenantal and communal practice of tuition equity was a labor of love by all those involved.

As we seek to honor those folks who brought the Christian Learning Center through these early years (1980 to 1996) and ultimately its first thirty-five years as well – I can only say I was more than pleased to help lead the charge, set the agenda and be part of that incredible team! 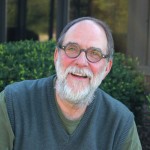 What a beautiful story! Praying for that to happen more and more at our school in Ohio.